This is a Public Service Announcement for musical artists.

To radio people, your metadata is like your book cover: if it looks bad, no one picks it up for a closer look (or listen). 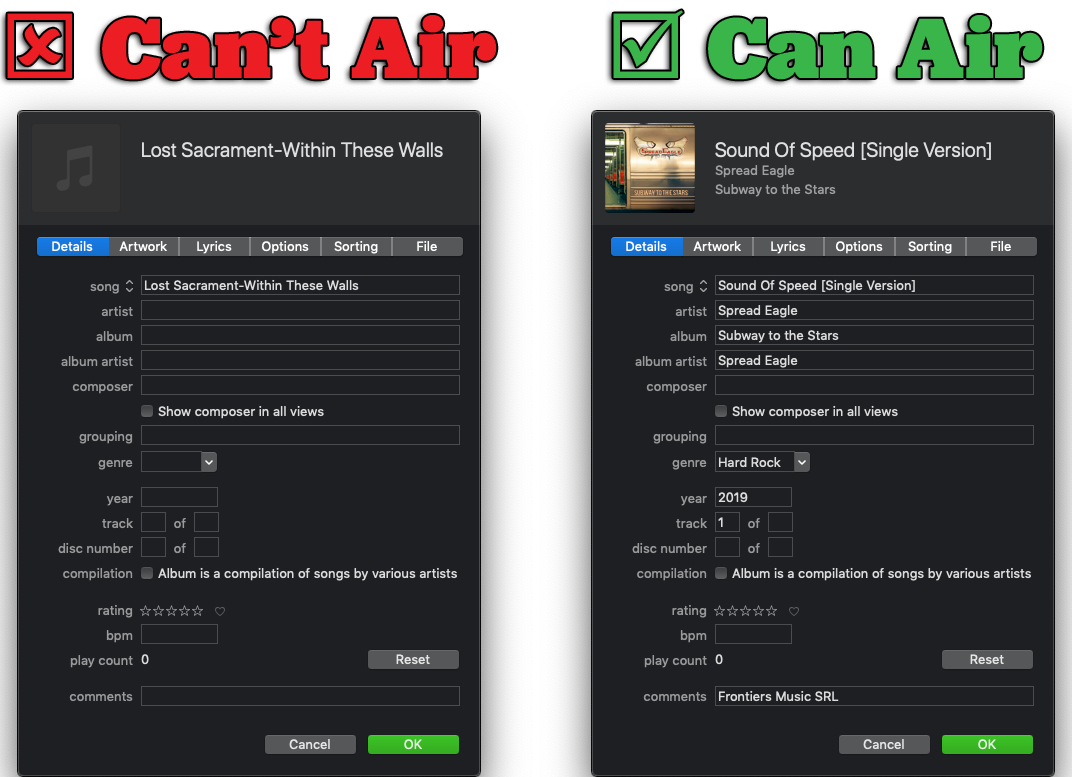 If you want to get aired, make sure your metadata is complete and correct. Follow the below concise advice to maximize your chances of getting your music on air… Well, honestly, if you don’t follow the advice below, your submissions probably won’t even be considered for broadcast. Many broadcasters just delete submissions that don’t have proper metadata before even giving them a listen.

I host an internationally-syndicated radio show and I play unsigned and indie label bands. I also know a lot of other show hosts, DJs, and program directors. We tend to talk, and one of our biggest pet peeves about your submissions is your metadata. In fact, I’m writing this blog post because of several recent discussions on Facebook among radio people in which we discussed metadata pet peeves, and in which several of the participants–people who choose whether your music gets on the air or not (or Net, it’s all air)–said things like “no metadata = no air,” “if the metadata is wrong or incomplete, I just delete the tracks,” “Mama’s done spending the day fixing music, I pay to play it and I don’t get paid to fix it,” and “ain’t no one got time to fix some wannabe’s metadata, even if he is the next Dr Dre.”

Many radio people will simply reject your music if the metadata isn’t correct and complete.

Do yourself a favor and do it right. A visual example of right and wrong is below the Dos list.

Do Your Metadata Right

In this screenshot from my own submissions folder–and I’m sorry to call out these artists–only Midnight Bullet and some of Scythe for Sore Eyes sent complete metadata. The others have various problems that make me (and whomever else they sent their music to) have to choose to either manually fix the problems or not play them. So far, I just haven’t had the time to fix the metadata, so I haven’t played them on my show; I haven’t even bothered to listen to them because they’re not broadcast-ready while others–like Midnight Bullet–are broadcast-ready. 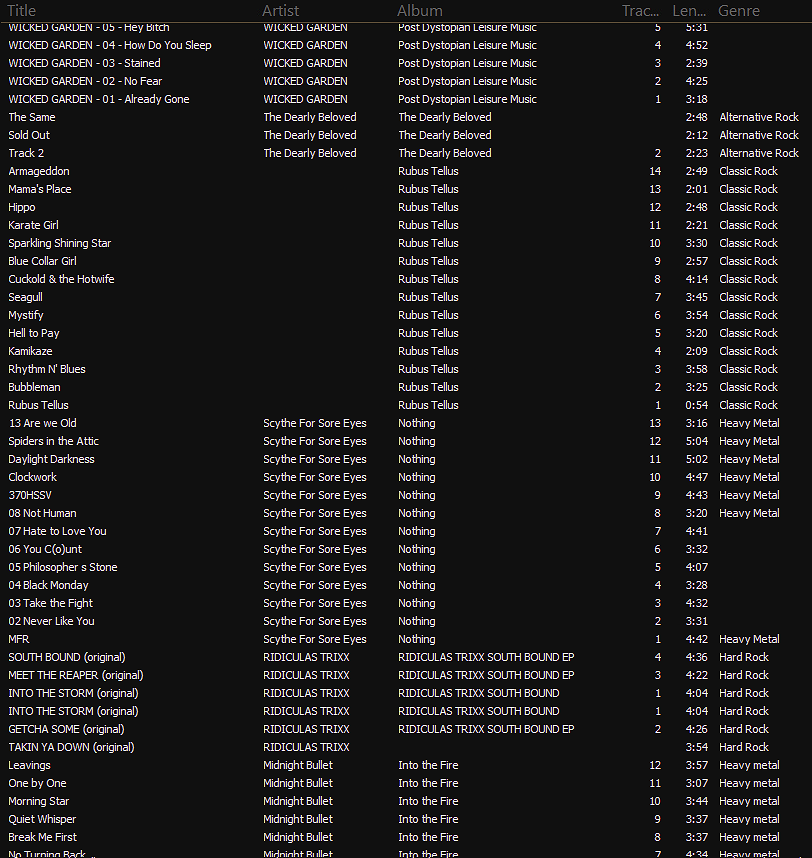 In this one, who is the artist? What’s the album? How am I supposed to play those when the FCC requires terrestrial radio to supply the artist, song title, and album title; when Live365 requires Internet stations to report the same data; when the same metadata is required for reporting to BMI and the other PROS so that the artist and label gets paid? Me broadcasting those tracks with missing metadata is illegal and will get me fined and/or pulled off the air, so I’m not going to air them.

Here at least I’m supplied with the artist and track title, but both in the Title field (“song” field in iTunes, not that I use iTunes/Apple Music for anything to do with brodcasting). Still, which one is the artist name? Is the artist “Lost Sacrament” or “Within These Walls”? Either is plausible in Hard Rock and Metal. If I guess wrong, the band and its label don’t get paid for me playing it on all my affiliate stations. And that’s not to mention that apparently I’m expected to make that guess, trim the Title field down to just what I guess to be the Title, then fill in the Artist field myself. 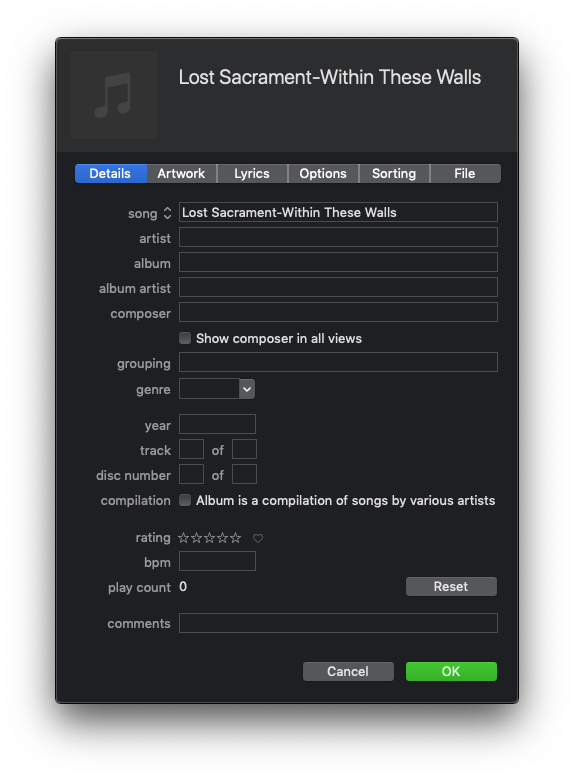 Yes, I could spend my time (or pay an intern for the time) searching through the 150+ submission emails and EPKs I get weekly to figure out the missing metadata and then edit the tracks one by one, by hand, while I’m busy doing 20 other things preparing a show, but… Well, it’s not going to happen. I’m not going to do it, and neither are other professional broadcasters. Broadcasters like me are most likely going to ignore these submissions entirely and focus on music whose creators took the time to give us, our listeners, and the regulatory agencies who make the rules what we each need–full and complete metadata.

I wrote this blog post to help you, whether you’re an artist, indie label, or distribution service. Metadata matters a lot.

For radio people, your metadata is like your book cover: if it looks bad, no one picks it up for a closer look (or listen).

If you want to know why metadata is such a big deal to us… Well, it’s a long answer. The short answer is: we’re legally required to have it, broadcast it, and track it by the FCC, for artist payment purposes, and a few other reasons. So this post isn’t about radio people being lazy or nitpicky; it’s about you making sure you give us what we need so that we can consider airing your music and mixes.

I just asked two popular Rock music marketing agencies to stop sending me their artists’ promos because, even after I warned them more than 30 days ago that the metadata was incomplete and/or incorrect on their promo distros, they kept sending them to me unbroadcastable. I’m no longer on their promo lists, so I’ll never again get music from their artists. And, I’m not the only broadcaster who won’t accept music from these agencies any more.

The below screenshot is some of the latest (and final) dozen artists and albums they sent. As you can see, the Titles are messed up (track number and sometimes artist name in the track Title field) and marketing copy and the genre are appended to the album title. Two complete albums had blank artist and album title fields!

These can’t be broadcast as they are; it’s against FCC regulations for terrestrial radio, and against Live365 and other online track identification rules for online broadcast. So, the tracks get deleted and never aired. I don’t know of any Program Director, DJ, host, or other radio professional with the time or interest in fixing your metadata.

If your distributor sends out your music looking like the below, then you shouldn’t be surprised when your music doesn’t get played.

This is what separates professional music distributors from everyone else. The professionals deliver tracks that are ready for broadcast. 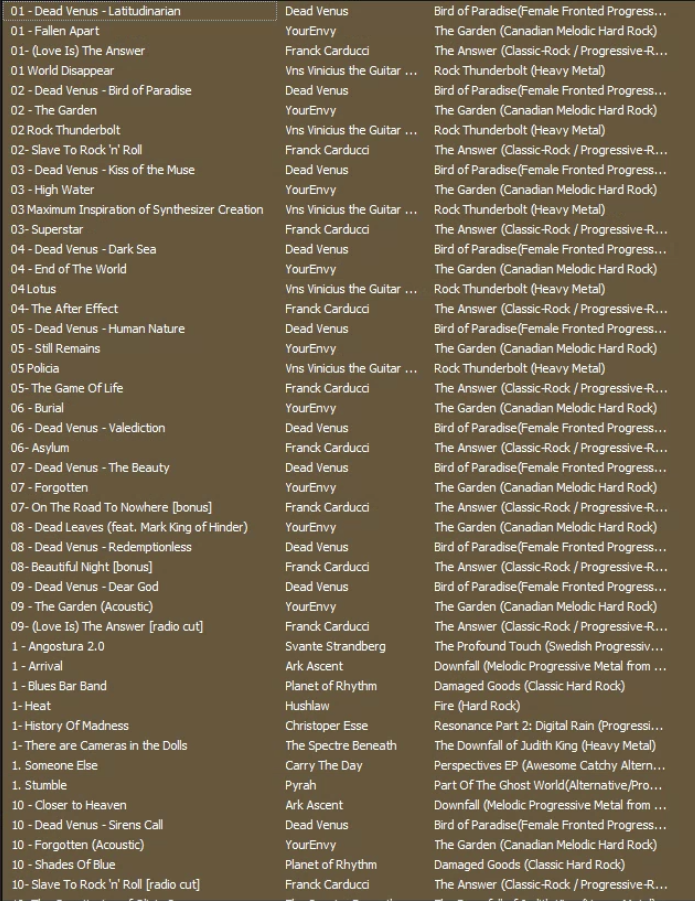